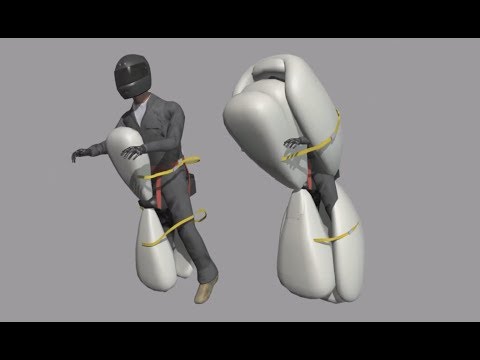 We will soon have Airbags for motorcycle riders. It is a well-known fact that riding puts you at risk of being injured, even more so than you would be otherwise driving a vehicle, the reason for this is that a lot of the safety features available in cars such as a seat belt, and airbags, and the crumpling feature that most cars come with, as a matter of fact, it is an often mistaken fact that older cards are better than new cars and the cause of this misconception is that the old cars were not able to crumple and thus absorb more of the impact so the force does not get transferred to the occupants of the vehicle. But I digress this airbag works by first detecting an impact which is similar to cars but instead the airbag deploys from the waist up and there are straps around the rider's waist that the airbag connects to then wraps around the biker providing full 360-degree protection against impact. This is a much-needed invention as before now bikers had no protection at all, and with a fatality rate of over 4 percent of crashes or fatal compared to other vehicles combined 0.29 percent, and for auto vehicles there is a 31 percent injury rate in accidents compared to motorcycles whopping 78 percent. So it is fair to say your risk of getting injured is significantly higher on a motorcycle which is why in order to become a rider there are special requirements. This is the start-up company name Airbag for Bike, they are based in brooklyn.